The stern of the wreck lies at 35 feet deep. MARK B. HATTER

The sinking of the SS Umbria

IT IS MAY 1940, AND GERMANY HAS BEEN AT WAR WITH THE UNITED KINGDOM for more than eight months. Tensions are high across western Europe. It appears inevitable that Italy, under the fascist government of Benito Mussolini, will enter the war aligned with Germany.

In Naples, Capt. Lorenzo Muiesan of Italy’s SS Umbria, a maritime transport ship still flying a neutral flag, observes the ominous work of his crew loading war supplies aboard his ship. The cache — 6,000 tons of bombs, 600 cases of detonators, and 100 tons of weapons — passes by nurses pushing strollers along the quays.

Built in Hamburg, Germany, in 1911, the 10,000-gross-ton Umbria is an impressive cargo vessel. At 506 feet long and 60 feet wide with a cruising speed of 14 knots, it can readily transport a lot of cargo quickly. In an apparent attempt to cloak the ship from its purpose, an additional 2,000 tons of construction materials and general cargo, including three Fiat 1100 sedans and cases of wine, surround the war supplies.

The general cargo is bound for Asia, but the tools of war will arrive in the Italian-occupied territories of Eritrea and Somalia to bolster their defenses against the U.K., which controls coastal Africa from Egypt to Sudan. In theory, the substantial war cargo will have the Italian territories ready if and when Italy decides to join the war.

Eighty-two years after its last voyage, the Umbria is a garden of marine diversity. Its superstructure and gantries are festooned with all kinds of benthic creatures, including stony corals, soft corals, and marine sponges.

On June 3, 1940, the Umbria reaches Port Said, Egypt, where the British navy detains it for three days over concern that it could be hauling war contraband. The neutral flag, however, means that the navy lacks probable cause for search and seizure. Muiesan cleverly loads an additional 1,000 tons of coal and water to further the cover-up. The ploy works, and the Umbria is released to sail south under the escort of the British navy’s HMS Grimsby.

With the risk of Italy joining the war at its apex, British ally New Zealand sends the warship HMNZS Leander to intercept the Grimsby off the Sudan coast on June 9. The Leander orders Muiesan to weigh anchor on Wingate Reef, a little more than 3 nautical miles off Port Sudan. Claiming that the Umbria is smuggling war contraband, Lt. E.M.C. Stevens from the Leander boards the Umbria with 22 British navy sailors to conduct a thorough search of the ship. Surprisingly, they find no weapons of war, yet they remain aboard the Umbria while it is in detention.

The next day Muiesan receives a radio transmission that Italy will declare war against the U.K. and France at 7 p.m., with hostilities to begin at midnight. Not wanting those who will be his enemies within hours to seize his valuable cargo, Muiesan burns sensitive documents in the kitchen’s boiler and devises a brilliant plan to scuttle his ship.

Approaching Stevens, he requests permission to conduct a muster ship drill, which is not unreasonable considering the tensions. Stevens considers and then grants the request. What could go wrong with his sailors still aboard?

After his crew evacuates on lifeboats during the drill, Muiesan secretly orders his ship’s engineer to scuttle the vessel. Two mechanics enter the engine hold and break the cast-iron plates that block the seawater intakes. The Umbria quickly begins to sink, leaving Stevens no choice but to get his sailors, Muiesan, and the Italian crew still aboard off the ship and abandon it. The Umbria soon settles to the bottom, resting on its port side, with the stern at 35 feet and bow at 125 feet.

No sailors died in the incident, but Muiesan and his crew spent the remainder of the war in prison for their deception. In the 82 years since its scuttling, the Umbria has transformed from an early casualty of war to a coral-covered museum of fascinating history. Some argue it is the best wreck in the Red Sea, aside from the Thistlegorm.

A hot, dry wind blows as we gear up under a cloudless sky for our first dive on the legendary Umbria. It is a straightforward dive, as the predive briefing outlined, with much of the ship’s cargo holds and artifacts accessible without deep penetration. I make a mental list with my shooting buddy, John, of the locations I want to explore and their distances from the three separate holds and superstructures.

My top priority is shooting the Fiat 1100s, which requires a short, quasi-penetration with a twist and an upward turn along a gangway. From there, we will enter the dark hold where the vehicles lie in perpetual rest. I also prioritize the hold with the bombs.

Fortunately, John has dived the Umbria three times before. While it is not a remote dive site, few liveaboards venture there, making it artificially remote.

John’s memory is good, and he guides me directly to the Fiat hold. He generously signals for me to go first. I twist in, turn up and over, and carefully pull my way along the gangway to the vehicles, looking for a good angle in the cramped hold. My light illuminates the silt, reminding me to minimize contact with anything in the hold, lest a plume erupt and destroy my images.

We move to the hold with the bombs and then to another to see the detonator boxes, which have rotted and left a scatter of unrecognizable bomb parts on the floor. We take our turns shooting the artifacts, mindful of the ever-present silt.

John signals for us to move toward the bow, but my computer suggests otherwise. It’s time to backtrack to the safety-stop line. The bow can wait for our second dive.

It’s late afternoon when we finally arrive at Umbria’s bow, shooting her outside superstructures and gantries along the way. The ship’s crew scuttled it while at anchor, and it settled with the chain stretching at a 45-degree angle, giving the appearance that the chain prevents it from drifting away.

In the gloaming I find what I seek: a pair of twoband anemonefish (Amphiprion bicinctus), which are endemic only to the Red Sea. They are halfway down the anchor chain in a bubble-tip anemone (Entacmaea quadracolor). I shoot the iconic subjects against the Umbria and silhouetted dive buddies in the failing light.

We do six dives on the Umbria, including two night dives. A shooter could spend every dive on the superstructure and artifacts, but the marine life on the vessel is impressive and worthy of your time. All of this, combined with the serenity of a seldom-visited site, make the Umbria one of the world’s most rewarding wreck dives. AD

Virtually dive the Umbria in these videos. 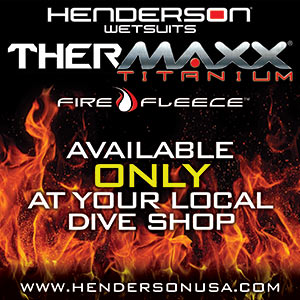